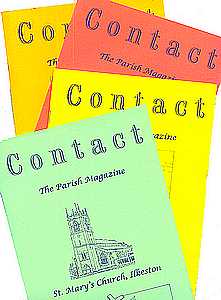 The Church Magazine is called ‘Contact’ and it is published on a monthly basis. There are eleven issues each year with a double edition covering July and August. A monthly letter from the Vicar or one of our Readers, news, puzzles, amusing anecdotes and dates for your diary as well as interesting articles are all included. The magazine also includes a supplement from the Diocese of Derby called ‘Our Diocese’ – a monthly snapshot of the Church of England life around Derbyshire. The cover price is just 35p per issue and annual subscriptions cost only £3.50. Copies of the magazine can be sent by post at the subscription price plus the appropriate post and packaging costs.

Stella Petitt took over the editorship of ‘Contact’ from Doreen Beighton in April 2011, not really knowing what she was taking on! But Doreen was extremely helpful in those very early days. From April 2017 when Stella was unable to continue with this task, an Editorial Team was set up to continue to produce the magazine. The remainder of this article is an edited version of what was written by Stella and still details what goes on to facilitate the magazine’s production.

Each year in February all the people who advertise in ‘Contact’ are contacted to thank them and ask if they would like to continue for another year (April-March). We ask if they would like to update their advert and quote the cost for the coming year. Since the establishment of the Editorial Team, Carol Gregory has agreeed to take on this task.
When all the adverts for the new year have been confirmed, including some new replacements, they are passed to Garth Newton, who has nominally taken on the role of editor to include them as he compiles the magazine each month. A copy of the April edition, when it is ready, is then sent to all our advertisers so that they can see their adverts in print.
Another annual job is collecting the subscriptions from you all.
The monthly task of preparing ‘Contact’ begins as soon as the current issue is published by preparing the regular pages….
1. The diary page – by checking with the Vicar (although whilst in the Ineterregnum this is not possible) Readers and Churchwardens, and also, the lectionary which lists any special festivals.
2. The registers page – which lists any baptisms, weddings or funerals that there have been since the last magazine was produced.
3. The rotas page – at the back of the magazine
4. The front cover.
5. The diocesan pages for the centre of the magazine are downloaded from the diocesan website.
6. Regular contributors are also contacted to verify that articles, poems etc will be forthcoming.
St Mary’s subscribes to a website called ‘Parish Pump’ which is produced especially to help editors of church magazines and supplies articles, pictures, cartoons, puzzles and ‘smile lines’. Whilst preferring to use items of a local interest, it is extremely reassuring to have this facility asvailable and often prompts ideas for articles that can be written by people locally in our own congregation.
The editor is always very pleased to receive items or ideas – don’t wait to be asked!
Other things included are reports on social or fundraising events that have taken place or adverts for events to come and also a puzzle of some kind, funny stories and a page for the children (all quite often, although not always, from Parish Pump).
Finally, when all is laid out and ready, it is double checked and proof read it (Editor – although invariably something unforseen still slips through) before it is downloaded onto a memory stick for transfer to James New in the Cantelupe Centre office to print and collate ready for publication on the last Sunday month.
A few days after publication the magazine is included on the church’s website.